Writing for the Birds

(The photos in this blog post -- except for book covers -- were taken by me, copyrighted by me, and can only be used with permission.) 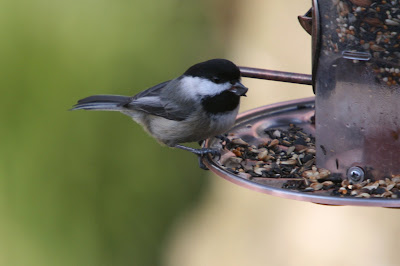 I am standing at the living room window in the early morning (when I should be writing) sipping coffee and watching the yard come to life.  There is a bird feeder in the cherry tree by the deck, and every few seconds a tiny black-capped chickadee darts from a bush by the sidewalk, undulating in a quick wave, up and down like a dolphin swimming in the sea, and lands unerringly on the tiny plastic perch of the feeder.  They never seem to miss, even when the feeder is swaying in the breeze. And I never get tired of watching them, trying to imagine the very different world they inhabit, only a few feet away from me.
The legendary science fiction editor John W. Campbell

) to write an alien character "that thinks as well as a man, but not like a man".  My little songbirds, who don't share a common ancestor with me for something like a hundred and eighty million years, are as alien in their way as anything in science fiction.  Attempting to see through their eyes (which are sensitive to a much wider range of the spectrum than mine) stretches my imagination to its limits.

I get some help from Jakob von Uexküll

-- a German baron born in 1864 -- a biologist and physiologist, with a deep interest in animal behavior--whose work would become the foundation for the imposingly named field of "biosemiotics" -- literally, the study of the signs and symbols of life.

At first glance, none of this -- chickadees or and old German scientist --  seems to have any relevance to the art of writing (or reading) fiction, but Jakob von Uexküll introduced a concept called the umwelt (um velt) which is invaluable not only in understanding my avian neighbors, but also in the creation of vivid fictional characters.


Imagine the chickadee again. The umwelt is the bird's subjective world. "We must first blow," Uexküll writes, "in fancy, a soap bubble around each creature, to represent the world which it alone knows ... When we ... step into one of these bubbles, the familiar meadow is transformed ... Many of its colorful features disappear, others no longer belong together.  A new world comes into being."


The chickadees, for instance, can see in the ultraviolet -- they see patterns on plants and animals which are totally invisible to me.  They can very likely see the polarization of sunlight and detect directions from it.  They may even -- we know this is true of other songbirds -- be able to perceive the magnetic field of the Earth.  And what's more, they live in a world much more three dimensional than my own.  Where movement, for me, generally takes place on the surface of the world, chickadees are free to move in any direction.  They can fly.


To get into the soap bubble of another creature, we must look at a few important elements.  What are they capable of perceiving? What is most important in their lives? And how do they act upon the world? These elements define the creature's umwelt or "self-world", and they are the levers which allow us to step into that world.


Chickadees eat insects, seeds, berries.  They live in trees and they are, at least in this area, pretty much protected from predators.  They are too small and fast to be worth a hawk's time, they don't spend enough time on the ground to fall victim to cats very often.  As a result, they are bold, curious, almost fearless.  I have leaned over the rail of my porch and looked down into the eyes of a chickadee looking back at me over the distance of a few feet.  I am important in their world now because I take care of the feeders, but often the activity of humans, even very close to them, barely registers at all.  We are unimportant, mostly nonthreatening, and hence invisible. 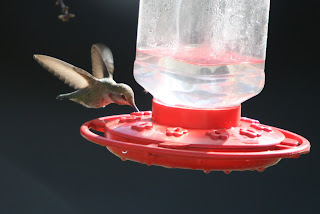 I have watched chickadees and hummingbirds share a single tree in my yard.  To us, it looks like they share a small space, but I suspect that their umwelts barely overlap.  The hummingbirds are interested in syrupy sweet nectar, from flowers and feeders, which in turn fuels their constant hunt for insects.  Small, incredibly fast, as maneuverable as dragonflies, and fiercely territorial, they are solitary where the chickadees are social, and so aggressive that Ancient Aztec warriors took hummingbirds as their symbol, and wore their bright feathers into battle.  As focused as the hummingbirds are -- they live always on the thin line of survival, where every calorie can be the crucial difference -- I wonder if the incidental chickadees even register on their perception -- any more than songbirds downtown register on the perception of busy humans. 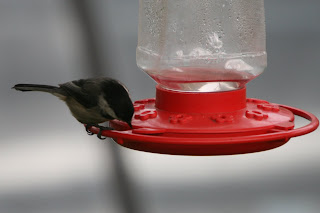 From the outside -- the perspective of an omniscient narrator, perhaps -- these creatures inhabit the same world.  But within their individual soap bubbles, what exists and what doesn't, what is important and what is not, what they care about and what they don't, those worlds could be totally different.


The same is true of our fictional characters.  I am fond of the omniscient perspective, the view of the Elizabethan novelist who wanted to show us all the levels of society and how they interacted, even when they were oblivious to each other.  In modern terms, it's the perspective of the ecologist, who can see how so many living things share the environment, even when they never perceive each other.  But as writers, we also have to be able to draw close, to get inside the soap bubbles, and see the world as the individual sees it.


Imagining ourselves into the minds and lives of other creatures -- human, alien, or animal -- is the ultimate creative act.  It can be argued that the most important contribution of fiction -- and especially of the novel -- to human culture is exactly this, that it allows us to step outside our own limited experience and see the world from other viewpoints, in other times and places.  That it broadens and deepens our sense of fellowship with other creatures.  As storytellers, as readers, and as a civilization this is something we desperately need.


So we can fly with the chickadees.
(Books and Beast readers might also want to check out the latest post at Birdland West -- "A Flock of New Books for Birders" featuring the best of recent books on birdwatching, gardening and related topics.)